Acne is a skin infection due to blockage of hair follicles.  The usual places are face, neck, chest, back etc.

The main causes are

This boy was suffering from acne for several years and had visited several doctors, including homoeopaths and took all prescribed medicines with great care. But there was no relief and rather the disease continued to progress to the extent that now he had several ugly looking scars on his face. He felt so embarrassed by the ugly scars on his face  that he covered to hide them with a muffler when moving around.

As I have treated many such cases I took up the case with a promise to do the best for him. The result was amazing and today not only that his Acne has been cured but also that the ugly scars from over his face has gone.

N.B: This case is only illustrative, several such cases has been treated benificially in our clinic and every patient coming for the treatment of Acne has witnessed relief. Acne is a very common complaint, encountered by young between 12-14 years. This is more common in girls and in those who have an oily skin. In absence of any specific cause resulting in Acne several factors have been associated by the one while some other by others.  Although eating some kind of food items has been attributed to the occurrence of acne by some authority, but it is not an established fact. In some cases cosmetics instead of helping it relieve have in fact aggravated the condition. Familial predisposition has been found in some individuals. In some 70% of females it tends to become aggravated at the time of their menstrual cycles.

With some cases difficult to relieve and a common complaints in young girls you are likely to get good number of case in your clinic. Whereas some cases get very fast relief, in others it is difficult to bring relief and then it becomes a challenge for the doctor and a very big problem for the patient. It is more so because it many cases it leaves very ugly scars. Homoeopathy in some cases can do wonder and is usually helpful in bringing relief to all patients. I have cured many difficult cases of Acne, in some with very bad scars. Homoeopathy can bring the desired result in majority of cases, provided the homoeopath has the required skill and knows the technics of the homoeopathic practice.

This patient, aged about 22, suffering from Acne for more than 3-4 years came to me for consultation. Before coming to me she had been to several doctors, including homoeopaths of her locality, with some relief or no relief at all. As not much of symptoms were available to build up the prescribing totality, I settled down for Kali brom, as it is one of the commonest medicines for acne.6 doses of 30 potency were given which did work very positively and when she came for follow up after about 20 days she was more than 50% relieved. I repeated the same medicine without changing, either the potency or dose, which brought more relief to the patient. On her next visit after about a month she was fully relieved and only placebo were given for some more days, before the case was closed and declared as cured. Over the year I have treated successfully so many cases of Acne of different varieties that I feel a confidence of a specialist in this matter. Several cases with very ugly scars have been benefited by my treatment.

This case in question is one of Acne with very bad scars. That was a cause of so much embarrassment for the girl that she was not attending social events or functions. Listening from others she came in to my consultation. The relief started with very first dose and she improved totally within few months. I can not share with you the joy which appeared in the girls face For Treatment
Acne improved marvellously for a your girl at D.N.De HMCH

This is another beautiful case of acne that has seen marvelous improvement under my treatment. This girl with acne first came under my consultation on 6/8/2015 at D. N. De Homoeopathic Medical College and Hospital. The girl had tried acne medications and ointments but without any noticeable changes. Anyways she was prescribed Kali brom 30/6 bd. In few weeks time her acne started to disappear. In few months even her scars started to vanish and her skin got smoothened. For Treatment
Acne cured in a young boy aged 16 years

This is a case of a young boy, aged 16 years who came for Homoeopathic consultation at one of our branches in Kolkata. He had been suffering from acne since couple of months and had tried many form of treatments including the home remedies. Still, his acne kept getting worse so much so that dark pigmentation (black skin) became to appear in places where there were acne.
The young boy driven by his young blood was very tensed and worried for his acne. Assuring him of his recovery, the treatment was started and the result is much evident in the photographs taken before and after the treatment. The boy got cured of his acne in few weeks.
Slowly even the blackened skin began to get clearer after we asked him to apply the medicine externally on the darkened portions of the skin. This boy, aged 18years, student by profession, came for his acne treatment at one of the branches of  The Care and Cure Homoeopathy clinic. He had been suffering from acne on his both cheeks and also on his forhead. He also complained of oily skin. His treatment was started immediately and he was also given a homoeopathic face wash to be used daily as external application.
In few weeks his acne got cured permanently and so did his oily skin which had been causing his acne to recur every now and then. 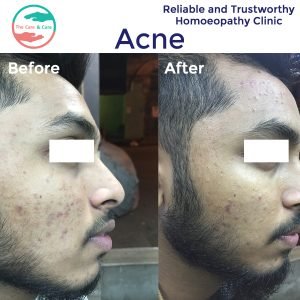